Fourteen authors of lesbian fiction contributed otherworldly, thrilling and supernatural short stories that will keep you glued to your seat.

The ghost hunters of SpiritQuest, LLC are preparing for a visit to the historic Halstead House, where the ghost of 26-year-old Lily Halstead reportedly appears. The crew discovers that Lily left behind a female lover and a bit of a love story, which adds to the mystique of this paranormal case. Is Lily waiting for her lost love? The chance to perhaps find out, plus the mysterious Sky Adams, who volunteers to accompany them to the Halstead House, promises to give the intrepid ghost hunters a Halloween to remember.

A woman on a camping trip believes she’s dreaming about her ex-lover visiting her on Halloween night…but it’s no dream.  And while her love may become rekindled, her lover isn’t exactly how she remembers her.

Taylor’s ordered, boring world is turned upside down when she impulsively steals a jacket. It’s magic, and now she can’t take it off. Suddenly, she’s taking crazy chances with her future—risks that put her center stage at a première Hollywood Halloween party and into the arms of its lovely hostess. Is it a dream come true, or is Taylor losing herself to the magic?

Cori Kane: A Lesson in Magic

At her best friend’s Halloween party, Erin meets Raymond and finds him strangely attractive. Strangely, because she’s a lesbian and men haven’t been on her radar for some time. But Raymond is not quite the man his costume might suggest.

First dates are nerve-racking under the best of circumstances. Ann really likes Erica but is convinced it can’t work out. It never has before. She pleads with her furry companions to behave. Will they? If Ann reveals her secret, can Erica handle it?

Melanie reluctantly accompanies her friend Rachel on a ghost walk. She has no way of knowing that she will be in for a ghostly night of pleasure of her own. Exasperated by her friend, Melanie takes off to go home when she decides to stop at a quaint tea room for a bite of supper. Vykky is closing down the tea room but offers her a special brand of hospitality that will leave Melanie questioning her views about the supernatural once and for all. **First published in Coming Together Girl on Girl (Aug 4, 2013)

When cop Allie gets home late from the night shift, she finds her girlfriend, Violet, home early and annoyed. The couple’s squabble turns into an interesting and feisty argument, as Allie—a vampire—must convince Violet—a human—that she has not done anything she shouldn’t while on shift. Allie thinks back on her busy night, which involved a crash, a robbery, and her feeding on fresh blood and must decide what details to reveal and what to keep hidden for later.

Gem has carried a torch for the way-out-of-her-league Kate since they were in high school together.  When she flees a party after fearing her unrequited love has been exposed, she meets a mysterious woman who gives her a whole new perspective on the situation.

May Dawney: The Road Home

Heading home from a crazy Hallow’s Eve shift at the local bar, Rebecca Linder finds herself face-to-face with a ghost story come to life. Things are not always what they appear, however, and sometimes the worst moments in a life can lead to some of the best.

Orhea the dreamer: That Day

Angela White is your average Texan living in a rural community. In great detail she describes the infamous Halloween day when she took a trip into town and met with fate in the form of a hitchhiker, who happens to be a werewolf hunter.

Maxie Douglas’s husband, Zachary, was mowed down by a hit-and-run driver five years ago on Halloween. Far from grieving, Maxie is eternally thankful to the driver for saving her from the monster Zachary had become. She longs to meet her hero or heroine, but there is much she doesn’t know.

In the town of Benevento, Italy, the ancient art of witchcraft was accepted and honored, unlike the rest of the deeply Catholic country, where witches were considered the devil’s minions. Raffaella, escaping an abusive marriage, stumbles upon a witches’ Sabbath near Benevento. Despite her fear, she is drawn to Serafina, a woman participating in the ritual. Serafina shows her compassion and respect and offers her shelter, which Raffaella gladly accepts, and as the days pass, something more blossoms between them as Raffaella learns the healing arts and with the magical powers of il noce, the sacred walnut tree, discovers her own special gifts.

Epifania Gordy comes home to New Mexico to mourn the death of her lover—or join her. When she uses remembered fragments of an ancient Highland ceremony to summon Sadie, what she conjures isn’t who she expected.

In the wake of a tragic accident, a woman suspects that her wife may be haunting the house as a ghost. 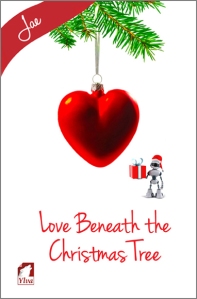 Three short stories that follow the lives of Rachel Lewis, self-confessed Christmas Grump, and Lillian Coleman, the woman who makes her believe in the magic of Christmas again.

***The Christmas Grump***
For Rachel Lewis, a security guard at the mall, the Christmas holiday season is one big headache. She wants nothing to do with the celebration of love, peace, and family harmony. Her disenchantment with the holiday slowly begins to change when she meets seven-year-old Tyler and his mother.

***Kissing Ms. Santa Claus***
Rachel is counting the days until she and Lillian celebrate their first Christmas together as a couple. She is filled with longing for only one thing to make her holiday complete: a long-term commitment from Lillian. She sets out to find the perfect gift that will reflect her love and devotion.

***The Christmas Elf***
After her home state finally recognizes same-sex marriages, Rachel wants to propose to Lillian. Rachel is confident she has it all covered. She plans to take a second job as the mall Santa Claus to earn the money for Lillian’s ring. But luck is not on her side, so Rachel finds herself with bells on her toes, playing a Christmas Elf.

Note: “The Christmas Grump” and “Kissing Ms. Santa Claus” have been previously published in the anthology “Gingerbread Hearts”.

Personally, I like Christmas. I mean, what’s not to like? Spending time with family and friends, eating good food, including German holiday classics such as Zimtsterne and Linzertorte, and having some time off to put your feet up and look back at the past year…

But, of course, not everyone feels that way.

Rachel Lewis, the main character in my series of short stories, doesn’t. She’s the proverbial Christmas grump. Her mother died a few months ago, her girlfriend left her and took their fake Christmas tree with her, and the Christmas carols in the shopping center, where she works as a security guard, are driving her crazy. No wonder she doesn’t like Christmas.

That is, until she meets Lillian Coleman and her seven-year-old son, Tyler. Lillian has her own reasons to dread Christmas. This is the first time she’ll have to celebrate Christmas without her late partner, and she’s still paying off medical bills, so she can’t afford the robot that is on Tyler’s wish list.

In “The Christmas Grump,” you can read about what happens when Rachel rediscovers her Christmas spirit and sets out on a mission to make at least one of Tyler’s wishes come true.

The next two stories, “Kissing Ms. Santa Claus” and “The Christmas Elf,” give us glimpses into the lives of our Christmas grump and her loved ones around Christmas one and two years later.

I hope you enjoy the stories in Love Beneath the Christmas Tree and have a merry Christmas!

Many greetings from Germany,

Thank you Jae for visiting the blog today. I am about to hunker down for a spell before going to work and start in on your wonderful holiday collection. I love your work and it an honor to share a publisher with you. Ylva is a special place that brings joy to readers everywhere and I hope you will all share your holidays with us this year.

Jae grew up amidst the vineyards of southern Germany. She spent her childhood with her nose buried in a book, earning her the nickname “professor.” The writing bug bit her at the age of eleven. For the last six years, she has been writing mostly in English.

She works as a psychologist and likes to spend her time reading, playing board games with friends, spending time with her nieces and nephew, and watching way too many crime shows.

When The Clock Strikes Thirteen

Luce Sheppard can’t ignore it any longer. She has to make a decision and time grows short. But refusing to make a decision is a decision, and she retires to bed, prepared to accept the results of her non-decision. That night an unexpected midnight visitor lands on her doorstep. Keira Keller, a distraught teenager, has lost her way home after a disastrous party. Luce steps in to help and in doing so receives answers to questions she didn’t know she’d asked.

Alex Stevens is a workaholic and a loner. Nothing and nobody can get past the cool exterior and solitary walls she has painstakingly created.

Until one night in October. One night that makes her step back and reassess what it means to be alive.

Laura Sullivan flees to her grandparents’ old cottage to escape the haunting memories of finding her brother in bed with her girlfriend. But even in rural Ireland, tranquility is easier to find than peace–especially when she meets an otherworldly being that leaves her a reminder she didn’t count on.

Tara is a nice little girl. Her friends, on the other hand, are… peculiar… A breeze of a story. Or the other way ’round.

Sisters of the Moon

The week before Halloween, Nicole joins her friends on a local ghost tour. In addition to visiting spooky sights and haunted grounds, she meets an enticing woman who makes her spine tingle. Who is the mysterious stranger? And how will the encounter end?

Seeking diversion from her job as a bookstore manager, Lindsay goes to a Halloween party at a convention center—and finds much more than she bargained for.

Werewolf Detective Taggert responds to a bomb threat at the convention center. An explosive situation, especially when raw chemistry hits them full force.

Can Lindsay open her heart and accept the fierce love of a red-hot shifter, or will they go their separate ways?

New Orleans. Vampires. Jodi goes to the former and finds the latter. She feels a mysterious pull that leads her to The Big Easy and to freedom, passion, and the startling revelation of what having too many daiquiris can make her do.

I am extremely excited to be a part of this anthology! Working with Ylva has been one of the most interactive and best learning experiences of my writing career. Kudos to Day, my wonderful editor. Thanks to Astrid for seeing a gem in the story of a werewolf detective with a penchant for redheads. On October 30th, the Liz McMullen Halloween special will air and you can hear the story read by yours truly, complete with dark and stormy night effects. Some of my fellow authors will also be on the taping, so I hope you will join me!

tell your stories ~ love your life